UKRAINE NOW. Ukraine had participated in one of the largest tourist exhibitions of the world world t

The National Stand of Ukraine had been submitted to one of the largest tourist exhibitions of the world - WTM that will take place in London on November 5-7 Organizer of Ukrainian exposure - department of tourism and resorts of the ministry of economic development and trade of Ukraine. Positioning of the stand and visualization of the entire advertising products had beenl match the new official logo of Ukraine - "Ukraine now ua". Technical and organization and artist works on a competition based on an experienced exhibition company "GRAPHIUM", with which the ministry has a contract. Exactly with "GRAPHIUM", in turn, the vascular tour operators of the in tourism and the hotel network of Ukraine have entered direct agreements. According to the director of the company " Graphium " Julia Sívak: " the total area of the stand counts 33 square meters, on which the first turn will be represented by the ministry of economic development, the city of lviv and Odessa, and advanced - leaders of the Ukrainian tourist business: Albatros, the travel group arktur Chernobyl Tour, Entdecke.Net DMC Gmbh, new logic, premier hotels and resorts, Sputnik Kyiv Travel Company, Ukraine travel lab ". The key of successful participation of Ukraine on WTM had become a implementation of public-private partnership, n the state, in the person of the ministry, unites and presents all regions of our country, and the business, in turn, will ensure a useful presence at the exhibition of the "tourist product" and its Major promotion on the world tourist market.By Message, by the end of the year, the national stand of Ukraine had been presented for two more international tourist exhibitions in Warsaw (Poland) and Barcelona (Spain).

GRAPHIUM WILL EXHIBIT on EUROSHOP 2020 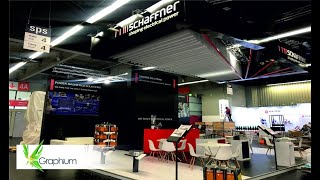 The exhibition WINE & SPIRIT will complete its work tomorrow